Dr. Elisha Kent Kane was born on February 20, 1820 in Philadelphia.
Graduating at the age of 22 from the University of Pennsylvania
he joined the Navy as assistant surgeon and when in 1850 he learned
of the pending voyage to the Arctic, to determine the fate of the
Franklin Expedition, immediately signed on as surgeon. No trace of
of the previous expedition was found and the two Navy ships spent
the winter of 1850 trapped in the ice. They returned in the summer
of 1851 without the loss of a single life and Dr. Kane was credited with
their survival. He set out again in May of 1853 as Commander of a
single ship with a crew of 17. The expedition did provide much new
information  about the region but the ship eventually had to be
abandoned after being trapped in the ice. The crew traveled 1,300
miles in 81 days by small boat and hand drawn sleds to the Danish
Settlement of Upernavik, this time suffering the loss of 3 men.

In his book on Augustus B. Sage, Q. David Bowers presents
evidence that either Sage worked with George H. to produce this
medal or intended to distribute these, and that it was struck in 1859
because of the date in Roman numerals on the reverse. But was this
reverse produced to use with this medal? George H. also used this
Masonic die with his Non Nobis Solum Medals (Baker 289) and the
Latin phrase on the reverse - Not for ourselves, but for the whole world
were we born - is a phrase I would expect to be used to refer to
Washington rather than Kane.

A brass version of this medal was listed in an 1894 Chapman Auction
catalog of Isaac Woods' collection. There is an example in the collection
of the ANS that is described as two combined silver electrotype shells,
with a weight of 500.8 grains.


The Milford-Haven catalog of naval medals list two mulings of the
obverse of this medal with other George H. dies; No. 617 reverse is the
Three Muses die, No. 617a utilizes The Great Medal of Honor die (both
pictured below) and both appear to be struck in aluminum.


The image below is from the Tulane University Digital Library
(https://digitallibrary.tulane.edu/islandora/object/tulane%3A50462)


The reverse of this medal is from an Arctic Exploration medal by Tiffany & Co.
This medal is listed as being 59.7mm, the Kane medal being 50mm. But
notice what appears to be extra wide rims on the obverse. The listing does not
indicate what metal it is struck in.

Satterlee 126, white metal, 42mm
The obverse die is the work of Francis N. Mitchell and with the
original reverse is listed as HC 1844-4 in Sullivan's "American
Political Badges and Medalets". The note with this entry reads
"It (the obverse) was used later with a reverse cut by
George H. Lovett commemorating Clay's death".

During a three day festival in New York City in November of
1859 celebrating the 100the anniversary of Schiller's birth
the first sculpture to be installed in Central Park was a bronze bust
of Schiller, a gift from the German American community in the City.
I have not been able to find any evidence that this medal was
commissioned for the event; probably another example of
George's entrepreneurship. 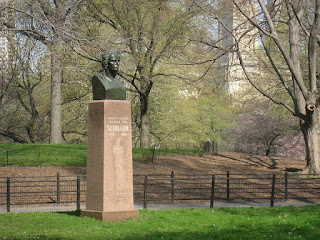 Although primarily known as a dramatist, poet, and historian
Schiller did study medicine and in 1780 was appointed a
medical officer to a regiment in Stuttgart. Because of this
short medical career this medal is listed as No. 1347 in
Dr. Horatio Storer's "The Medals, Jetons, and Tokens
Illustrative of Sanitation" published in The Sanitarian,
July 1890.

Bronze, 40mm
Who was Elizabeth and why did George H. create a medal to
commemorate her death? I could find little on Elizabeth but
did find an interesting bit of information about her husband,
Ezekiel Jewett.  His entry in The Twentieth Century Biographical
Of Notable Americans states that "He gathered one of finest collections of coins and medals in the United States, 1859-64".
He was also in Albany, NY in 1866 when George H. struck
the medal for the Bicentennial celebration and received a
Ph.D. from Hamilton College which George had struck medals
for. If Ezekiel did not know him personally he must have
surely known of his work. Did George H. engrave and strike
these pieces to honor the passing of a friend's spouse or did
Ezekiel commission these?
For more on Ezekiel see the Rindge Historical Society Website
http://www.rindgehistoricalsociety.org/?page_id=131